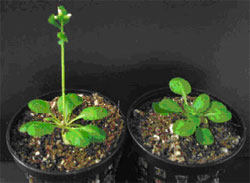 Abscisic acid has also been found to affect flowering (signaling-gateway.org).

Italian scientists have released a study in which they found that low doses of the plant hormone abscisic acid can reduce blood sugar levels in mice and humans. Abscisic acid (also known as dormin or abscisin II) is responsible for water conservation, seed germination, protein storage and other tasks in plants, can also be found in humans, and has been found to stimulate the release of insulin from beta-pancreatic cells.

The study, conducted at the University of Genoa, School of Medicine in Genoa, Italy, gave low doses of abscisic acid-rich vegetable extract or placebo to both rats and humans. Those who received the abscisic-rich vegetable extract(at 0.5 to 1 ug/kg) resulted in significantly lower blood sugar and insulinemia.

The findings suggest that chronic, low-dose administration of abscisic acid could also prolong the survival and function of insulin-producing beta cells, which, in people with type II diabetes, could improve blood glucose levels.

"These results warrant further studies, aimed at developing new pharmacologic approaches to diabetes prevention and/or treatment," said Mirko Magnone, Ph.D., a researcher invovled in the work from the Department of Experimental Medicine at the University of Genoa.

"Mom always said, 'eat your vegetables,' and now science backs up this advice," said Dr. Gerald Weissman, reports Diabetes.co.uk. "High blood sugar levels predict the later consequences of diabetes, and while this hormone may not be a cure for diabetes, it should prove very useful in helping to control progression of the disease.