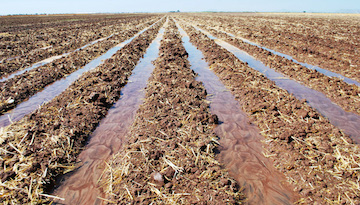 Water flow, or the lack of, is important in agriculture (whyfiles.org).

Studying the flow of water in soil is important for a number of reasons; locally, preferential flow effects water storage, nutrient retention and nutrient movement (small scale features such as root channels and animal burrows affect local preferential flow). On a larger scale, preferential flow affects how water moves among the oceans, air and land.

While none of this is new, researchers have found better and better ways to measure preferential flow; typically, previous field studies required researchers to disturb the soil, providing one-time results. Now, however, remote-sensing technologies are allowing soil scientists to study the same area over a long period of time.

And an initial study from a group led by Henry Lin, professor in the department of ecosystem science and management at Pennsylvania State University, looked at three years of data from 175 precipitation events, gathered using moisture sensors.

Lin found that small-scale elements heavily influenced water patterns. "It was the interplay between landform units and soil type, coupled with initial soil moisture and precipitation features, that determined the initiation and persistence of preferential flow."

"Pathways may be linked via a series of nodes in a network, which may be switched on or off and expand or shrink depending on local soil moisture conditions, rainfall inputs and plant activities," says Lin. "With time, these networks may self-organize, thus forming temporally stable pathways."

Check out the full article from Turf Magazine here, or through the link below.