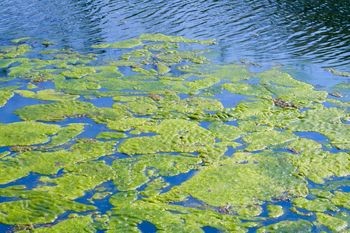 Not Richmond Park (image via mudmonsters.com).

Michigan- Despite voting for a tax millage to improve parks in 2013 (costing homeowners an annual average of $44 each), Richmond Park's pond is covered in algae, and local officials say they won't be doing anything about it. Officials say most of the park's budget is going to recreational activities so they don't have the funds to handle the algae problem.

And while algae is a annual problem at the pond, locals say it's worse this year than it's ever been. "I've never seen it this bad," said Sharon Koolsterman, who won't allow her dog Sweet Pea near the water. "We voted to take better care of the parks and look they aren't taking care of it. It is disgusting here the way it looks."

The algae is not suspected of being toxic.