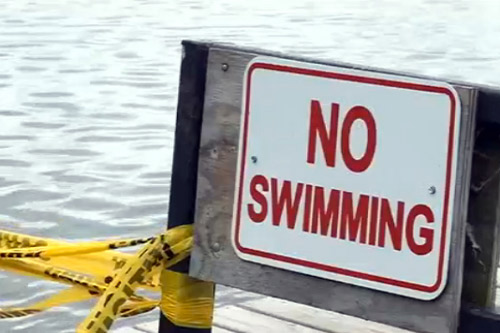 Aquatic Invasive Species (AIS) are easily transferred between different bodies of water and pose a serious threat to aquatic ecosystems. Public policy and common practices of water users should seek to limit spread and prevent new introductions. However, once AIS are introduced, management should be rapidly implemented to contain spread and reduce impact of new invasions.

The Break-Down of Aquatic Invasive Species

Aquatic Invasive Species are what they sound like: aquatic organisms that invade ecosystems outside of their natural range.  They are almost always transferred unintentionally (i.e., accidental introduction), but when they are introduced into a new ecosystem, they can potentially wreak havoc.  They typically reduce habitat quality of invaded systems and, in some cases, pose a direct risk to human safety and health (examples: dangerous swimming conditions in heavy weed beds or risk of injury from invasive mussel shells). Outside of their native range, AIS have few natural processes that keep them in check, so they often grow out of control and become dominant in impacted water bodies.

AIS pose a threat to the ecology of aquatic environments and if they are not controlled and/or eliminated, they typically have long-term effects on infested bodies of water.  Along with reduced habitat diversity and quality, they can limit the ability to manage floodwaters and can ultimately diminish shoreline property value.  In some cases, they can even lead to reduced drinking and swimming water quality.  Costs of managing established AIS can impose a significant economic burden on water users and various government agencies.

Preventing and Eliminating the Invasion

Aquatic Invasive Species can spread rapidly between adjacent waters and even regionally with today’s efficient transport of cultivated aquatic plants, boats, and other equipment from site to site.  In order to prevent the troubling overgrowth of AIS, policies are established on a national, state, and even regional basis but more effort is needed to limit movement of aquatic plants through the nursery trade and inter-lake movement of boats, baitfish, etc.

Early detection and rapid response to new invasions has strong economic and ecological benefits that must be emphasized and expanded. Management efforts—whether early or late following introduction—should be implemented using site-specific practices to further contain AIS and reduce their impact to affected aquatic sites.