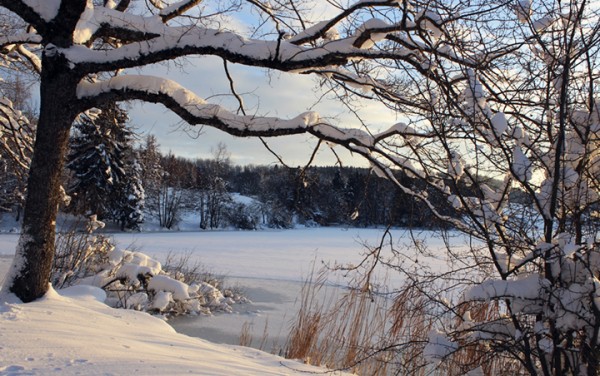 As the winter temperatures remain low, a lot of ponds remain covered with ice and snow. Some systems have been frozen over for extended periods of time this season. So what about the fish in your pond? Fish need oxygen to breath. Fish use their gills to take oxygen from the water, and produce carbon monoxide and ammonia in the process.  Oxygen is normally replenished in an aquatic system from atmosphere source and plant photosynthesis. During winter months plants are not active, and the layer of ice and snow prevent atmospheric aeration. So oxygen levels might drop and fish mortality may result.

To prevent winter fish kills several options are available. Following are a couple of the most commonly used methods to prevent winter fish kills. You could install a diffused aeration system which not only adds oxygen to the water as air is released from diffusers; they also maintain areas of open water for gases to dissipate into the atmosphere.  Deicers and horizontal mixers are commonly used to keep docks and boat slips ice free, but can also serve as a way to maintain ice free areas in the system.

The winter of 2014 might be one to remember for years to come. If we can learn anything from this experience as pond managers—it sure would have been nice to have an aeration system or deicer/mixer in place so I would not be worrying of losing my fish all winter.