The article "Common Aquatic Weeds" was originally published on May 10, 2016, on GCI.com. Available here. Sponsored by SePRO.

Pesky aquatic weeds come in all shapes and sizes. Some, such as duckweed and watermeal, float up to the surface of ponds "like a bobber when you're fishing," says Steve Kammerer, director of USGA Green Section Southeast Region. Others, such as hydrilla, dig further into the ground, says Dr. Rob Richardson, assistant professor of crop science at North Carolina State University. Here, experts provide insight on common aquatic weeds how to best treat them. 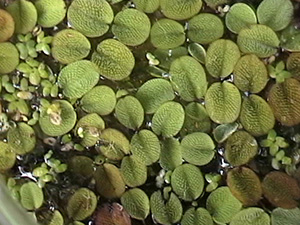 Description: Duckweed forms a surface film, but depending on the region of the country, it can often be more difficult to control than a submersed plant, Richardson says.

Range: One of the most common aquatic weeds, duckweed outbreaks are documented across the country. Rock Barn Golf & Spa in Conover, N.C., gets it once or twice a year in one of the course's 14 lakes, says superintendent Curtis Macemore. "I think last year I had duckweed one time, just in one lake, that was brought in," he says. "I happened to see it on the duck that day."

Aggressiveness: On a scale from 1 to 10, with 10 being the most aggressive aquatic weeds, duckweed varies anywhere from a 3 to an 8, Richardson says. Duckweed sits along the shorelines, Kammerer says. It thrives in warm, shallow, still and fertile waters, he adds.

Management: While Macemore uses a contact herbicie in his non-irrigation ponds, Gary Roush, semi-retired superintendent of Riverside Golf Club in Mason, W. Va., uses Sonar in his. The SePRO product SonarOne, a contact herbicide, or a different Sonar product are recommended by Scott Shuler, invasive weeds management portfolio at SePRO. SonarOne, a systemic herbicide, should be applied on seasonally irrigated ponds with caution in the fall, Shuler says. 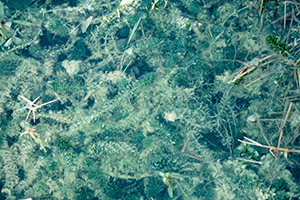 Description: Hydrilla forms tubers in the sediment which Richardson says makes it so persistent. "Hydrilla has more lance-shaped leaves and whorls of anywhere from four to six or seven, typically," he says. "It doesn't have a bract that comes up above the water surface, but it will release really tiny flowers that can float right at the water surface."

Range: Hydrilla is the most widespread in the Southeast. Hydrilla and other weeds thrive in the South largely because the ponds, lakes and waterways are shallower, warmer, higher in nutrients and sunlight can reach them in more growing months than in the North, Kammerer says.

Aggressiveness: "Hydrilla would be a 10 because there's nothing else as aggressive as hydrilla, really, in the situations where it can grow well," Richardson says. "There are some invasive plants that can grow on the water surface and atop it, but not much else that can compete in the water with hydrilla," he says.

Aggressiveness: Watermeal can range between a seven and eight, and it's often harder to control than duckweed, Kammerer says. "The reason why that one is actually more problematic it's much smaller, more difficult to contact with herbicides; less herbicides are active on it," he says. "It can actually get through screens and clog up the irrigation heads."

Management: Copper compounds with less copper cation, or elemental copper, per surface acre than copper sulfate, such as Komeen, can be better alternatives, said Kammerer. Many factors determine how much chemical to apply, when to apply it and how often, he says. Such factors include water flow, temperature and turbidity, he says. 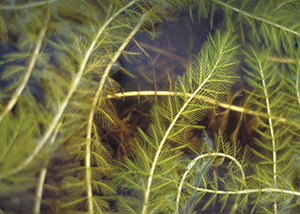 Description: Variable watermilfoil are often brownish, while Eurasion watermilfoil are typically bright green in color, Richardson says. "The milfoils have feather-like leaves and whorls," he says. "They'll also have a short flowering bract that shoots above the water, but the flowers are really reduced, so it's hard to see the flowers. There will be a small segment of the plant that pops above the water surface."

Range: Watermilfoil is found primarily in the north and survives better in cool water than most aquatic weeds, Kammerer says. "That is the biggest northern aquatic weed issue, bar none," he says.

Aggressiveness: On a scale from one to 10, watermilfoil would be about seven, Richardson says. Like Hydrilla, watermilfoil is an invasive species, so it's often more difficult to control than native species, Shuler says.

Management: Between 40 to 60 pounds of Komeen Crystal applied throughout the season would take care of watermilfoil, Shuler says. Between 6 and 10 pounds of SonarOne applied at the end of irrigation season for an irrigated pond or in the early spring for a non-irrigated pond would do the same, he says.

Patrick Williams is a contributing editor for Golf Course Industry.