Elodea Found in Alaska Lake - The Stewards of Water Blog 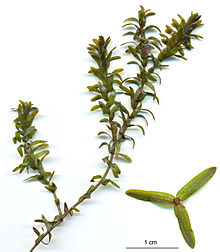 Found when drilling an ice-fishing hole, invasive elodea has been identified in Sport Lake. The lake, a go-to spot for sportfishers due to its central location in the Kenai Peninsula and regular stocking efforts from the Alaska Department of Fish and Game, was found to be clear of elodea as recently as a 2014 survey.

However, despite the confirmation, not much elodea has been found in the lake, and many are taking this as a good sign. Of the 120 holes drilled for the event, elodea was identified in only one, as well as an additional one during a re-survey of the fishing holes (which officials believe was caused by students).

Elodea has some history in the state. It's been documented in the Matanuska-Susitna Valley, Fairbanks, Cordova and Anchorage, as well as three lakes in the Kenai Peninsula (Stormy, Daniels and Beck lakes in Nikiski). There has been some success in eradicating and controlling Elodea in a few of these lakes.

For the full article from peninsulaclarion.com, click here or on the link available below.