Hydrilla Florida's Most Expensive Invasive - The Stewards of Water Blog 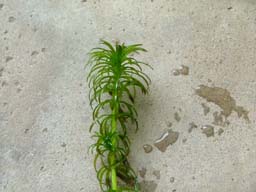 With a cost of $66 million over the past seven years, hydrilla is the most expensive invasive plant in Florida waterways. To put that in perspective, the total spent on controlling invasive aquatic plants for those seven years (2008-2015) was $125 million; putting hydrilla at over half the total monies spent (that is, according to the Florida Fish and Wildlife Conservation Commission).

While most of this money goes towards chemical control, which has proven to be the most effective so far, US/IFAS scientists have also researched the use of sterile grass carp as a control method. While grass carp are great at eating back hydrilla, they also eat everything else, so their use is limited to small, enclosed ponds (and they are also a non-native species themselves, being imported from Asia)

"Hydrilla restricts water flow, and that's a problem especially in South Florida during tropical storms," said Gettys, a UF/IFAS assistant professor of agronomy and aquatic weed specialist. "Water can't move in canals, which can cause flooding."

For the full article AGPRO, click here or on the link available below.