When we talk with people about the quality or appearance of their lake or pond water, one of the biggest complaints we hear is about pond scum.  While the most common cause is algae, it could be something else.  That’s why we recommend the “hand test.” 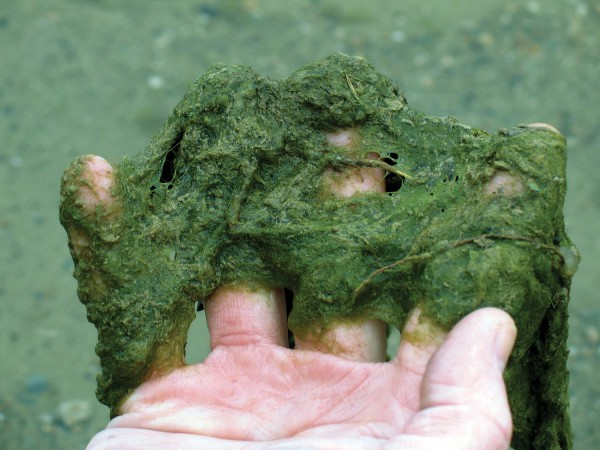 Is your pond scum algae or something else?

There is one easy way to find out what’s in your water: pick it up.  Grab a handful of the pond scum, touch and, it look at it carefully.  Then choose which of these descriptions fits best:

It is slimy to the touch

It is most likely algae.  There are several types of algae.  You can use our Weed Identification tool to determine which kind of algae you have.

It is most likely a type of algae called filamentous algae.  Also known as “pond scum” or “moss,” this type of algae can form dense, hair-like mats on the water’s surface.

It is gritty to the touch

It is probably a weed called watermeal.  Watermeal is actually a rootless plant, and the smallest seed-bearing plant in the world (about the size of a grain of sand).  It comes in many different shades of green. From far away, it looks like pond scum.  On closer inspection, you will see that these scum is actually made up of clusters of these little green plants.

You probably have duckweed.  Duckweed (also called duck meal) is a small floating plant about the size of a pencil eraser.  The color is often described as similar to a golf course green.

The bottom line: Pond scum is often assumed to be algae.  That is frequently the case – but not always.  You could have a floating weed like water meal or duckweed.  If left unchecked, these weeds can spread quickly. So take a moment to inspect your issue closely.  The answer to your problem is in the palm of your hand.

One last step: wash your hands

Most aquatic weeds and algae species are not harmful to the touch.  But just in case you’re dealing with a toxic form of algae, be sure to wash your hands thoroughly with warm, soapy after you conduct the hand test!