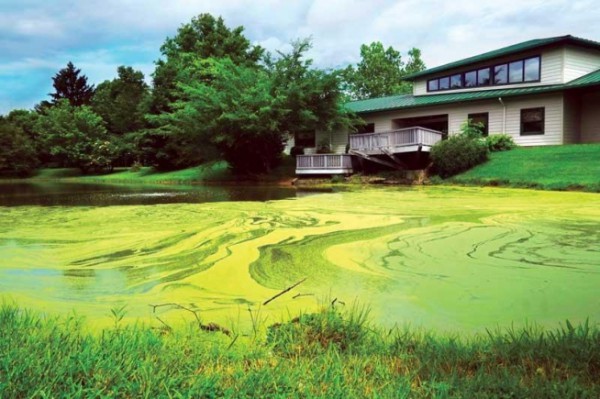 Watermeal, an invasive free-floating plant, has taken over the pond in front of the ODNR building on East State Street in Athens. A wildlife biologist says another herbicide treatment is planned as soon as possible. (Athens NEWS file photo).

A small pond in front of the Ohio Department of Natural Resources has a big watermeal problem. According to Mike Greenlee, an aquatic biologist with DOW District 4, a couple ounces of an aquatic herbicide were used in May to help control the invasive. “We would like another treatment here soon,” Greenlee stated; he went on to say they would probably have to wait until the warm weather passed or risk depleting the oxygen levels, which could have negative effects for plants and wildlife. “We’re going to monitor the dissolved oxygen levels and look for a window where we have some weather that would be favorable for treating.” They admit it isn't great PR for Ohio’s DNR, but according to Greenlee, “I can’t recall any recent complaints.”