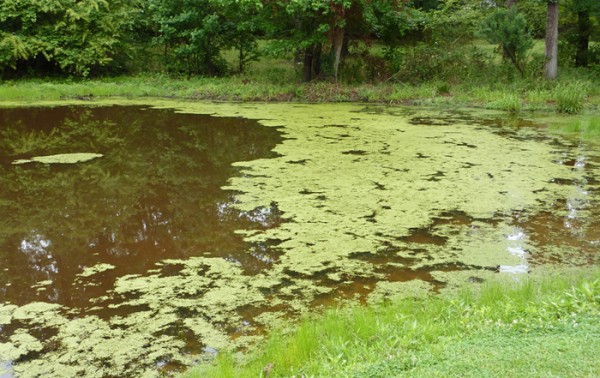 Duckweed is a small green free-floating plant that is fast growing and tends to form dense mats that often completely cover the surface of a pond.  Substantial growth from duckweed can cause big problems.  Apart from the simple fact that a full mat of green over a water feature lacks aesthetic appeal, the other costs of duckweed are substantial. With the entire body of water covered, duckweed prevents sunlight from getting into the water and causes low levels of oxygen and poor water quality – these conditions may lead to fish kills.  Duckweed can also impede water supply movement at intake points.

As you determine your strategy for controlling duckweed, think long term.  Of the many SePRO management products available, a fluridone-based product such as Sonar® Genesis offers a good solution.  It is a fast-acting resource and allows you to often see results in less than four weeks.  You can gain control quickly and expect results for the remainder of the season.  Often, years of control can result from one treatment with a fluridone-based product.

A typical Sonar Genesis application includes an initial treatment in the spring and then small bump treatments three or four weeks later to maintain the proper concentration and control. Ideally, apply before the duckweed completely covers the water to ensure impact and results. Early in spring, watch for signs of growth and treat at rates of 30 to 60 parts per billion with a simple surface spray.

Another option would be a product called Stingray® Aquatic Herbicide (active ingredient: carfentrazone-ethyl).  With Stingray, you will see significant results in 3 - 5 days. Stingray can be used alone or in combination with other systemic herbicides such as Sonar Genesis.